A little time has passed now, and so I feel like I can write about one of my favorite nights of the year with a little perspective. I struggle to even talk about it because I feel like there is not a huge group of people that relate to the way I feel about getting to participate…but when I’m there…I know I’m not the only person who has looked forward to it all year.

As some of you may know, I grew up the daughter of a pretty successful high school football coach. I watched from the bleachers until I was old enough that the high school cheerleaders welcomed me down to the track to cheer with them during the games. I think I was in first grade. When the time came for me to be in high school I found my way back to the sidelines as a cheerleader for real this time. It gave me the opportunity to be closer to the game. And to make sure we weren’t one of those squads cheering about wanting a touchdown while our team was on defense. I knew I wasn’t going to get to play football…but I grew up loving it. And so when we got to Wake Forest, and the first Women’s Clinic took place…I had found my way back.

I think what few of the coaches could have anticipated was how much the women who attended this night would love running football drills. Our numbers were made up of football fans, moms of players, and coaches’ wives. These were women who wanted to understand more about the game and wanted to try their luck at doing what the players do. (We do realize it’s a watered-down version, but still…) After year one of the clinic the overwhelming suggestion was “Spend more time doing drills!”

As a former athlete I spent a LOT of time in the gym and at speed camp. Our strength coach, Mr. Vanderbush, had us sprinting over bags like it was our job. I could do cone drills all day. I knew that preparation was important for me at the time, but could not have predicted how it would translate into my adult life. But Ladies’ Clinic was my chance to see if I could still do it!

Now at this point I feel like I need to reveal something about myself, or at least remind those of you who read about it already: I love a good hype video. Love it. At the beginning of the clinic, Coach showed clips from last year’s drills mixed in with clips from actual football games. It felt like Thanksgiving Day backyard Turkey Bowl. Everyone knows it’s just for fun. But we kind of all want to win…or at least look like we know what we are doing. But as we run out on the field I always feel torn between being low key and laughing about how silly we feel…and trying to make the end of camp highlight film.

This year things started off well despite the most awkward part of camp: wearing actual football jerseys. If you have never put on a real, game-ready jersey you may not realize that they are cut significantly different than your run–of-themill fan jersey. These have to fit shoulder pads and be tight enough to not be used by the opposing team to aid a tackle. In other words, not built for a woman’s curves. I feel like I have a slight advantage over some of the women at the clinic who may not realize that football positions are associated with certain ranges of jersey numbers. Little numbers are typically skill players…if you want some room in your jersey you gotta think O-Line numbers. Now these are my guys, so 50s, 60s, 70s are my go-to range. The sleeves are tight, the shoulders puff up way above where normal shoulders would fit, and they reach down to your knees when stretched out. It’s hard to feel athletic despite it being what the players wear. Plus, those things are HOT! But jerseys were on, we made it in to the room for opening comments from Coach, and I got a seat in a row with a fellow coaches’ wife and some moms of our players. The best row. Then we were divided up into our teams.

On the way to the clinic I called my dad for some pre-game pep talk. I told him I was prepared to dominate. And when teams were called, and I saw that some of my favorite player moms were on my team, along with my friend and fellow coaches’ wife and the daughter of the head coach…well, I knew we were in for a good night. The actual drill work is unimportant in the re-telling, other than to admit I tend to slack on the tackling station. I am a 36 year old mother of 5. There is no good reason for me to be throwing my body at the ground. I don’t just think I would be sore for days, I know it!

The rule-follower/coach’s daughter in me can’t help but run from drill to drill. I have no desire to be called out by a coach for slacking! Those extra-competitive women in the group take turns pretending we don’t want to be at the front of the drill line for the first couple of stations, and then we admit who we are and hustle to the front to make sure we get a turn. But when drills are over…the fun begins.

Earlier in the night, when we picked a chair, we were assigned positions for the play. Those of you who follow me on social media may have seen last year’s play. My first collegiate (well, on a collegiate field) touch down. It may have been the highlight of my athletic career. And so it was not an accident that I wound up a running back again this year. Unfortunately, our opposing team had a former Women’s Clinic MVP ready to shut down the run, and we were told that we weren’t supposed to break through a tackle and keep going…so I didn’t quite make it into the end zone this year…but we got the first down…and I still loved every minute.

There is something wonderful about football that just sets it apart from other sports, even other team sports. Every single person on the field has to be doing exactly what they are supposed to do. Each position has a skill set that is unique to that position. There is room on a football team for all sorts of builds, all sorts of personalities. There is a magic about this sport that transcends even the silliness of a bunch of ladies dressed in jerseys pretending we know how to play the game. This game I love.

And so as I left the stadium that night, after texting video evidence of my big first down run, I called my dad to let him know that his little girl dominated the clinic. Even if it was just in my own heart. I felt the excitement and the adrenaline from a night under the lights, and I looked forward to the season. To watching the real athletes do what they love. And I was grateful once again to have a life that keeps me connected to this game.

I am a college football coach’s wife and a mom to 5 wonderful kids. I try to look for the humor in the midst of the hard and appreciate the adventure! View all posts by Alyssa Tabacca

Trying to find something?

What have you missed? 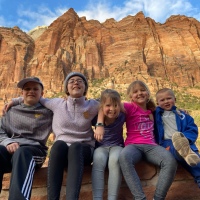